We recently flew around the world on a Lufthansa business class Global fare, including a leg on Austrian Airlines between Vienna and New York, after flying from Australia to Singapore with Singapore Airlines, and then Lufthansa to Europe.

After a slight delay in departing (around 2 hours) the boarding process went smoothly with the Austrian Airlines staff being extremely friendly.

Austrian Airlines cabin is fresh with a white and pale blue decor along with accents of red. The soft furnishings include features that reference Austrian Alpine style with gingham fabrics and embroidered deer motifs. The cabin is configured in a 1-2-1 layout giving every passenger aisle access. The Austrian business class cabins are small with just 7 or 9 rows, depending on which aircraft variation you are flying on. The seats are staggered, allowing room for your feet to go into a well created by the table in front, meaning that the window seats alternate between being against the window, with your table between you and the aisle, or being on the aisle with your table between you and the window. Odd numbered rows have the seat against the window, where as even numbered rows have the seat against the aisle. We were seated in 4K, and initially thought it would be better to be in a variation near to the window, however the side table is quite balky and when converted the bed sits quite low, so it may be slightly claustrophobic, however it does provides more privacy. Window seats are staggered, odd rows are against the window, even rows against the aisle. There are 2 controls for the seat, on on the table/arm rest, and another in the bed head which is easy to access when reclined (as mentioned, the bed does sit very low to the floor so a the second control panel comes in handy.) Seat controls in the arm rest. A second seat control is located in the bed head.

Upon boarding our seats were decked out with a pillow and blanket in Austrian styling, noise cancelling headphones, and an amenity kit including an eye mask and socks, toothbrush, ear plugs, face cream and lip balm. Additional toiletries including combs and razors were available in the bathrooms. Alpine motifs are seen throughout the cabin. Onboard essentials in the amenity Kit.

Upon boarding we were offered a choice of champagne or a fruity welcome cocktail. Before departure the onboard Chef made his way through the business class cabin to take our main meal orders. It was quite the novelty to have our order taken by a chef in full uniform. Throughout the flight, the chef could be spotted in the galley kitchen preparing meals. 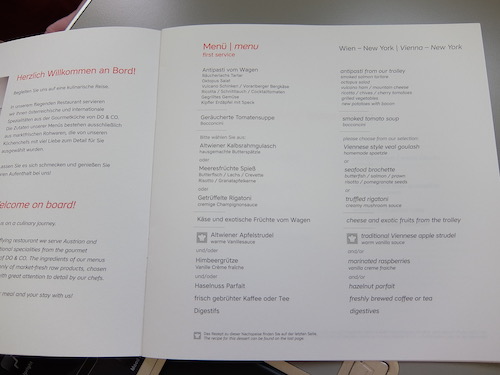 As we waited for our meal service, we were offered a selection of drinks and warm nuts to snack on. The lunchtime meal service started with a selection of antipasto dishes including smoked salmon, marinated vegetables, and cheese which were presented on a trolley allowing us to pick and choose our options. We chose a selection of all of the dishes, along with a glass of champagne, all of which were outstanding. Antipasto options presented to each passenger. Following the antipasto was a smoked tomato and bocconcini soup, and then main course. We chose the risotto and seafood main. the fish was a little dry but otherwise the meal was delicious. 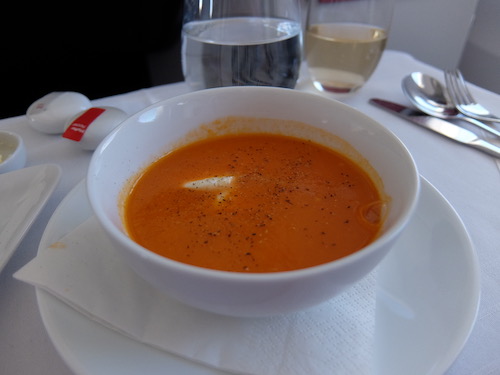 After main the dessert cart was presented with another rang of options to choose from including a selection of cheeses, fruit and desserts. At the same time a coffee menu was distributed which included a range of coffee, including some with alcohol. A range of coffee offered after the meal. Following the 4 course meal I reclined my bed to settle in for a movie. The bed was extremely comfortable, at 19 inches wide it is little narrow compared to other business class seats on the market however, again meaning that some people may find it more comfortable to be seated in rows with the seat next to the aisle. Prior to landing in New York we were offered another snack meal consisting of either smoked salmon or quesadillas. After a very smooth flight we landed at JFK. Despite the delay out of Vienna, our flight onboard Austrian Airlines was exceptional, the service from the staff was great, the bed and seat comfortable, the wine delicious and the food plentiful and tasty.