Lufthansa’s brand new A350-900 has made an appearance at Frankfurt airport ahead of its debut flight which will take off from Munich to Delhi.
A sneak peak inside showed the modern cabins feature calming colours and a unique lighting system that matches with the biorhythms of passengers in an attempt to reduce jetlag. 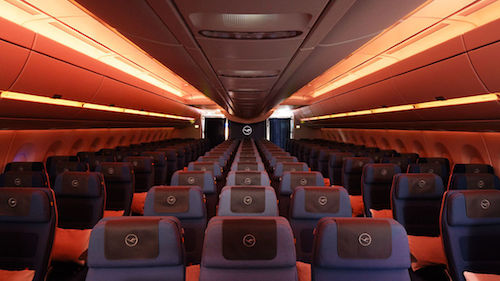 The Lufthansa A350 lighting system adjusts to reduce jetlag.

The Lufthansa onboard entertainment systems have been overhauled with the interface available in 10 languages, larger screens and the option to access and create your playlists up to 6 weeks ahead of your flight via the Lufthansa Companion App.

The aircraft can carry 293 passengers with 48 seats in business class. Lufthansa has opted for a 2-2-2 business class cabin configuration which is raising some eyebrows as many other airlines are going with a 1-2-1 configuration on their A350 aircraft however the cabin mains a comfortable and open feel without feeling over crowded.

The eco-friendly aircraft also use 25% less fuel, has 25% lower emissions and is significantly quieter during take off.

The first Lufthansa A350 aircraft will take off on February 10th from Munich to Delhi.